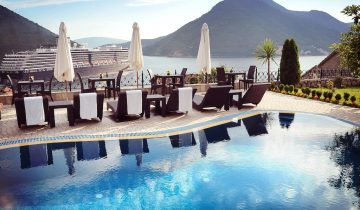 The material remains found in the peil of Spila near Perast speak of the very early presence of a man in the area of today's city. The city was named after the Illyrian tribe of Pirust and had a burning history. This small Baroque city came to its full glint in the 17th and 18th centuries. At that time, Perast had 100 of its merchant ships. Perast was married to Marine, and his seamen were known for their skills and courage.

In front of Perast there are two islands - Sv. DjĂ orde, which is naturally and the island of Our Lady of Ãƒâ € šÃ,â € ™ t tremble, which is an expert. On the island of Sv. DjĂ ordu is a church from the 17th century and a graveyard of old Peräs seamen. The island of Gospa of the Church has been trembling by the accumulation of stones at the already existing wall of the rock. Later, in 1630, there was also a church with a rich collection of silver coins with reliefs of ships describing the development of seafaring in Boka. The interior of the church was stolen with 68 paintings by Baroque master Tripa Kokolje, a native of Perast. On the right altar there is a picture of Sv. Rocco, the work of Italian painter Tiepol. In the merged house there is a small museum that contains a rich collection of paintings.